During the depths of the Great Depression, local millionaire Edgar Brown Jr. invested in a struggling local business. He recruited across the country to put together a team of financial, engineering, and marketing geniuses to develop Levingston Shipbuilding into a worldwide provider of marine vessels.

Tugs built at the yard in Orange backed up troops at the D-Day invasion. The Glomar Challenger research ship built at Levingston led to some of the most important scientific discoveries of the 20th Century, including confirmation of tectonic plates in the earth’s crust. Kennedy Class ferries constructed there carried millions of New York City passengers through a half century.

Paul Mattingly Jr. spent his boyhood connected to the shipyard, where his father served as chief financial officer.

During the past few years, Mattingly  has been on a hunt that he says “was like going down a rabbit hole.” He tracked down and recorded stories across the country about the shipyard and personnel. The true tales are the kind told with a smile while sipping from a glass of whiskey.

Mattingly said he couldn’t believe how the team kept work coming into Orange  and turned Levingston into an international giant.

“They had a can-do spirit,” Mattingly said. Imagination and innovation kept the shipyard going. Orange’s economy thrived during the heydays of the shipyard. 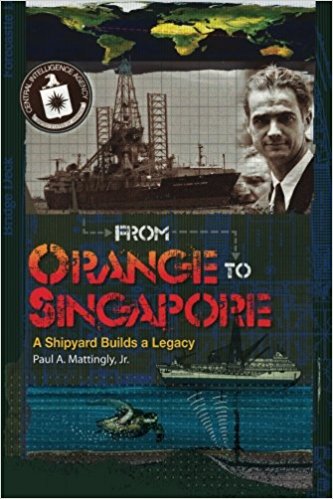 He’s written those stories in a collection that tells the story of Levingston Shipbuilding entitled “From Orange to Singapore: A Shipyard Builds a Legacy.” He will be at the Orange Train Depot on Green Avenue Saturday afternoon from 2 to 4 to sell and sign books. Proceeds will go to the depot museum project.

Mattingly said Edgar Brown Jr., whose grandparents were Frances Ann and Henry Jacob Lutcher, invested in Captain George’s business in 1933 and ended up with 80 percent of the business. Brown had vast investments in the oil business and was friends with Henry Wise, a founder of Humble Oil.

Brown used his oil business connnections and got shipbuilding contracts from Humble for vessels. Levingston was in business again, even during the Depression.

Brown’s recruits to work at Levingston also included William Ulcher from the United Fruit Company, where he oversaw over 180 ships. “He was a genius,” Mattingly said, a description he uses for several of the Levingston leaders. Peter Bednar was an engineer educated at the University of Munich who came to work for Brown.

Ed Malloy came from the construction side of shipbuilding and was hired in 1939. He was an expert in the then-new process of using electric welding. Malloy would end up owning a majority share of the company.

Cecil Beeson, who was an LSU graduate who had been captain of the football team, was put in charge of personnel. “Edgar Brown told him to go to South Louisiana and hire Cajuns and teach them English,” Mattingly said.

Beeson later became a vice president of the company and was appointed to the Lamar University board of regents. A building on the Beaumont campus is named in his honor.

Beeson was also known for hiring college students to work in the shipyard so they could earn money to pay for their education.

Others hired in those pre-war days included Otho Haunschild, Hoffpauir, and Clarence Levingston, a family member who had an engineering degree from Rice.

Mattingly said Levingston worked with General Motors to design diesel ocean-going tugboats that could be used in World War II. Levingston Shipbuilding, with only five acres, wasn’t big enough to get a large government contract. General Motors got the contract and subcontracted with Levingston. The tugboats sailed around the world during the war to service other ships.

At the end of the war, Brown wanted to get out of the business. Mattingly speculates it might have had something to do with war profit taxes. “He told my dad to sell the shipyard,” Mattingly said about Brown. When Brown mentioned the price of $500,000, Mattingly’s father told him the company had that much in the bank. “I want it sold in two weeks,” was Brown’s reply.

“That’s apparently the way he did things,” Mattingly said.

Ed Malloy, his brother Frank Malloy, Delbert Nance and Paul Mattingly Sr. got the financing to buy Levingston, with Ed Malloy keeping the majority of the stock.

Mattingly Sr. got out of the shipyard and began Marine and Petroleum Company in Orange. Mattingly Jr. ended up running M&P for decades. Though he sold it a few years ago, he said he has bought it back.

Levingston was bidding to build new three new Staten Island ferries in 1963 when President John F. Kennedy was assassinated in Dallas. “There was a tremendous backlash against Texas,” Mattingly said. “Bob Murphy went up to New York,” he said. He told the board ordering the ferries they wanted to name one for the slain president.

But that wasn’t enough. Ed Malloy, president of the company, was an Irish American Catholic, Mattingly said. Irish American Catholics populate the shipping industry around New York and Boston. They endorsed Levingston getting the contract. The JFK ferry ran its routes for more than 50 years and is still an auxiliary in the ferry fleet.

While trying to find more business, Levingston executives decided to reach out to scientists studying the depths of the ocean. They went to San Diego to the University of California Scripps Institution of Oceanography.

Levingston officials bonded with the scientists over wine and martinis to come up with a ship design that could be stable in a moving ocean while digging cores thousands of feet down. The Glomar Challenger’s exploration work is still used for geology and climate change studies.

Mattingly’s stories include George H.W. Bush, who would make trips to the shipyard while he was in the oil business. Names in the book run like “Eight Degrees of Separation” to show connections to Levingston all the way from Sam Skinner, a U.S. Secretary of Transportation and White House Chief of Staff, to Roger Goddell, the NFL commissioner. “It’s unbelievable the tie-ins,” Mattingly said.

Levingston still lives today. The company opened a yard in Singapore in the 1969 and it was named Far East Levingston. That business is now part of one of the world’s largest companies making drilling rigs, Keppel FELS (Far East Levingston Shipbuilding).
-Margaret Toal, KOGT-